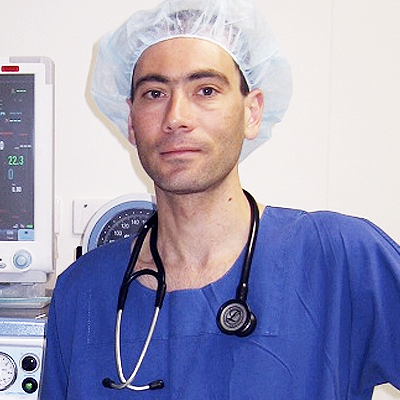 Dr Alexandru (Andu) Borsaru obtained his Medical Degree at Monash University, graduating in 1994. He worked for a few years as a hospital doctor in both Queensland and Victoria before commencing his Anaesthesiology training at Monash Medical Centre (Southern Health), which he completed in 2004. Having worked in both the public and private hospital systems he is now solely in private practice. His regular work is in Melbourne’s inner and south eastern suburbs at Cabrini Malvern, Epworth Richmond, The Avenue (Windsor), Linacre (Hampton), Chesterville (Cheltenham) and Corymbia House (Dandenong). He has a relatively varied regular case mix including anaesthesiology for ENT surgery, Neurosurgery (cranial and spinal surgery), Plastic and Cosmetic surgery, Orthopaedics (both upper and lower limb surgery), Urology (including robotic prostatic surgery), Paediatric and Adult Dental surgery, Obstetrics and Gynaecological surgery and Endoscopy. His professional interests include Day Surgery (it’s ever expanding list of suitable operations/procedures) and Recycling in the hospital arena (fostering greater awareness of and solutions for expanding such services). He is current Director of Anaesthesia at Corymbia House Day Surgery Hospital where he also sits on its Medical Advisory Committee. He is a member of the Australian Society of Anaesthesiologists.

Medical Degree at Monash University, Hospital doctor in both Queensland and Victoria before commencing his Anaesthesiology training at Monash Medical Centre (Southern Health)